We've been busy on some great new features

It's only been only a few short months since OnCheckin launched, and already we've accomplished so much even though we're only getting started. We've been taking all of your feedback on board and have added many new features and modifications to the service to serve you, our customers, better.

Some of the changes we've launched can be seen below.

One of the coolest things to come along with Visual Studio 2012 was Publishing Profiles, they store deployment endpoint information, user credentials and much more – and they're portable.

Publish Settings files have also got a good rep by being used by services like Windows Azure, DiscountASP.Net and many other hosting providers to make it easy to import deployment configuration into Visual Studio for deployment.

Now we support the use of both of these files as a way to easily hook up OnCheckin to your webserver! Simply upload your publish profile or pub settings file for easy project deployment configuration. 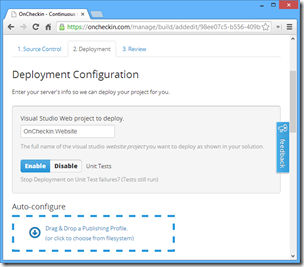 We've also made a few modifications to our unit testing support to make it easier to unit test your OnCheckin projects.

One request that we've had is longer unit testing session run times. Whether you're using a remote database server to run integration tests or simply have lots and lots of unit tests, hopefully we've now got you covered by doubling the unit test run times to 60 seconds.

When a build fails because your unit tests fail the first thing you'll want to do is investigate what went wrong. Until now this hasn't been too easy to do as we've just shown you a pass/fail. Originally this was driven by both a replication of other service's that do remote unit testing (AppHarbor and Cloudbees) and what they offered as well as a general sense of need (our deployment service came first).

This week we released functionality that allows you to see the exception type and a stack trace of your unit test making it easy to see why your test failed. 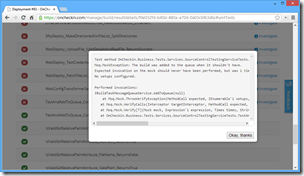 When we launched we supported users who were managing their source control using Bitbucket, Github, SVN, and Git.

We're now happily to offer our users support for Team Foundation Server in the same awesome service. Just enter your credentials and you're off an away!

Remember to setup alternate credentials if you're using VisualStudio.com hosted TFS. See our tutorial on how to do this here.

The launch of bigger plans and support for paid accounts

One of the most important features that was requested early on was support for multiple projects – something we've planned for from day 1. Unfortunately as we worked on scalability while under Beta we wanted to make sure we could offer the best service to all of our users, and this came with the need to place a limit on deployment projects.

Over a month ago we gained paid subscription plans, and with them the ability for you to continuously deploy more than 1 website. 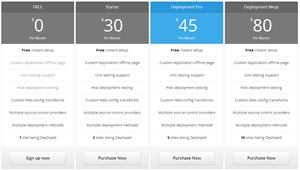 We also have even bigger plans and bulk discount options available – if you're a web developer or digital agency get in contact so we can tailor a plan for you.

It's also worth noting that we may not always have a free plan in the future,but will definitely keep our word to current free account holders having the option of free forever. So don't hesitate to remind your friends to get a free account while we're in beta.

We now scan your web.config file on every build and deploy for over 30 security issues, allowing you to see right away if there are any pre-flight security misconfigurations that you need to work on. 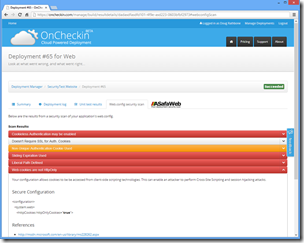 We've also built an integration with Troy Hunt's ASafaWeb security scanning service, allowing you to scan your website after we've deployed it – again we can do this on every build. It's dead easy to setup as well; just let us know your website's Url. 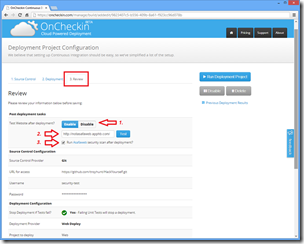 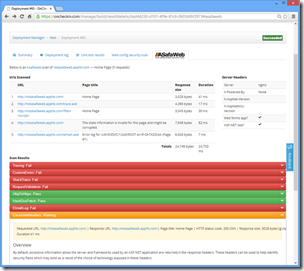 As OnCheckin grows to service more customers we'll be working to make the service even better overtime, but we really need your help. By getting in contact to give us any feedback you have about the service you can play a big role in helping us shape OnCheckin to be the biggest .net developer staple around.